It was the 30th Anniversary Clan MacRae Gathering, Dinner and Annual General Meeting at Albury from Friday 16th, Saturday 17th and Sunday 18th February 2018. What a great gathering it turned out to be with a wonderful group of MacRaes. It was a packed weekend, but that didn’t stop people comparing research and notes about their MacRae lineage and some new relations were located. 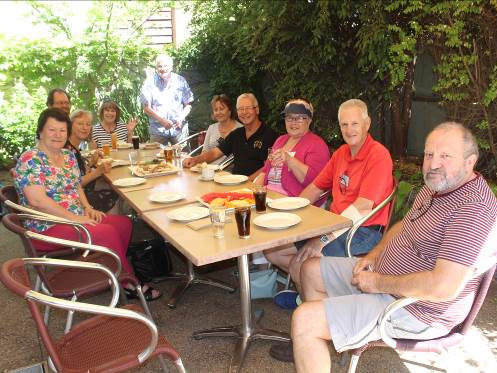 The 45-page Clan MacRae Chronicle with some 31 articles, including a brief history of Albury-Wodonga, a report of the 2017 Edinburgh Tattoo by a McRae who participated, a story on Beechworth, and numerous other accounts about MacRaes and other Scottish themes, was extremely well received by the reunion attendees with numerous compliments. Anyone attending the gathering received this booklet.

On Friday night there was a ‘meet and greet’ at the Soldiers, Sailors and Airmen’s Club’s bistro in Albury. Tables were reserved and a large number of people attended which was pleasing as some had travelled most of the day to get there. It was a great meal and a chance to meet numerous MacRaes that I had corresponded with but hadn’t actually met. Some members had travelled from Western Australia, Victoria, South Australia and from over New South Wales. 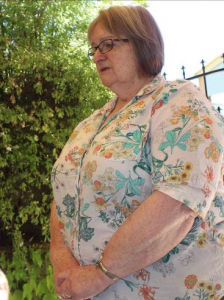 Saturday morning saw a large group up and ready for the historic bus tour of Beechworth and Yackandandah. They both have a fascinating history, beautiful streetscapes, quality shops and boutiques coupled with numerous restaurants, cafes and other eating establishments, wineries, and even a brewery. For the antique collector there was a great range that jogged the memories of some of us oldies.

Our bus driver proved very knowledgeable and we all enjoyed a scrumptious lunch with a cold drink at Hotel Nicholas, built 1857. It was very pleasant to sit in the cool of the garden. The hotel proved to be full of historic photos that showed the past from elephants walking down the main street after the railway line had arrived to Chinese general stores, the Alliance Hotel which was later called the Railway Hotel and many more.

Our luncheon host, Lorraine Lucas, former nurse, proved to be the town historian who knew a great deal about Ned Kelly and his association with Beechworth. She entertained us all with tales of what took place in those early days of the township which is certainly one of Australia’s best-preserved gold-rush era towns. 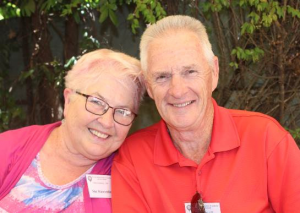 Sue and Tony Stancombe at lunch

There were many sites to see including the old stone Beechworth Gaol, the Rocky Mountain Company’s water diversion tunnel which is 1010 meters long, 2.13 meters high and 1.52 meters wide that was cut through granite under Spring Creek; the Gold Office; the famous Beechworth Bakery; the Beechworth Sweet Company lolly store with its a full range of lollies, boiled sweets, nougats, gob-stoppers, toffees, sherbets, truffles and chocolate; the Burke Museum, the old Hospital and Woolshed Waterfalls, and numerous other historic buildings.

Tom Griffiths was our knowledgeable bus driver guide, and past Clan member John Sinclair McIntyre joined us for part of the time, so was great to meet him also. 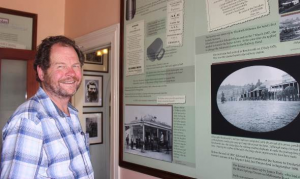 John McRae from Victoria admiring the photographic collection displayed on the walls of the Hotel Nicholas before relishing lunch. Afterwards the group had time for a walk around the village to get a closer look and to purchase some goodies and souvenirs. The drive around the Beechworth Lunatic Asylum which had been built in 1867 for some 1200 inmates was an eye opener.

The successful Annual General Meeting via a teleconference saw several members log in to participate in the proceedings and we thank them for participating. The AGM took place from 4.30pm to after 5pm which saw no change in the Clan’s Executive positions. 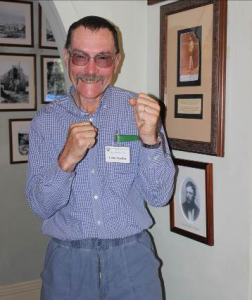 Colin MacRae posing like the photo of ‘boxer’ Ned Kelly taken in 1874 to his left.

The executive for 2018 is Alan McRae, President; Allan Smith, Vice President; Roslyn MacRae, Secretary and Tom Brown, our Treasurer. Seventeen members attended the AGM in person and thanks to them also. It was noted that Ann Hammond was at the first meeting of the Society and was present today. It was decided that the previous teleconference meeting time of 1.30pm was not designed to maximise the attendance, so members voted to move the meeting time for Ordinary Meetings teleconference to 7.30pm.

The 30th Anniversary Gathering Dinner took place on Saturday evening commencing with the Official Party being piped into the function room. Doug McRae, left, was our official Clan MacRae piper for the evening and also organised the evening’s entertainment later in the evening.

Colin MacRae, was the Master of Ceremonies and did a magnificent job as always. As Colin had not met any of the entertainers before he was almost overloaded with all the information. Well done Colin. 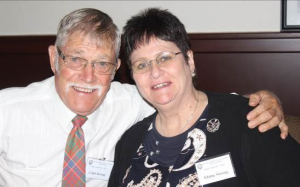 President Alan McRae welcomed the MacRaes, their descendants and guests in attendance telling them that there are a dozen ways to spell MacRae but this name brings together many people every year, both in Australia and New Zealand and indeed all around the world for Reunions and Gatherings such as in Albury.
Alan went on to explain that Elma McRae, who had for over two decades been our Secretary of the Clan McRae Society of Australia and New Zealand, and was to be bestowed with a framed presentation from Marigold Parker-Jervis,3
President of the Clan MacRae Society in the United Kingdom and the world on the night. Elma started as Secretary in May 1995. It has been almost a second life for Elma as she became the hub for news and contact for the members and their families. Elma was made a life member of the clan for her dedication a number of years ago.

Colin MacRae, was the Master of Ceremonies

Elma attended, possibly, over 100 gatherings as well as numerous dinners, reunions and more, starting in 1996. She would drive her little car packed to the roof with flags, banners, books and the like to gatherings around the state. As well, she attended various Scottish functions around Sydney on behalf of the Clan MacRae Society. Elma was also the editor of the newsletter, a job she loved to do. It was produced in black and white, four times a year, until recently when the Society went over to colour.

The Master of Ceremonies then read the Clan MacRae Grace written by past President, the late Ian McCrae, J.P., before the group enjoyed a delicious two course buffet dinner which had a good range of hot and cold dishes.

After dinner came the entertainment including two young ladies from Scottish Highland Dancing Albury Wodonga. With reels, jigs, and strathspeys to choose from we were treated to a display of professional dancing which was once the social entertainment and ceilidh events in many parts of Scotland.

One doesn’t really appreciate all the work that goes into Scottish dancing until one sees the girls up close. All those in attendance agreed that the girls had a great talent and they were thanked for their flair. 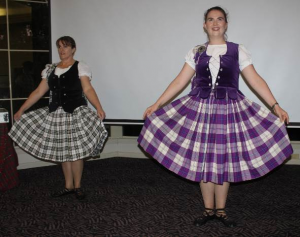 The dancers were accompanied by the pipes of Doug McRae and Scott Nicolson, the latter from the Scots School Albury, right, before the very capable piping duo played a popular selection of a recognisable number of Scottish tunes for all to enjoy.

A presentation of the Royal Edinburgh Military Tattoo 2017 was given by Scott Nicolson, The Scots School Albury and Doug McRae, both of whom travelled over to Scotland to take part in the event.

The event is an annual series of military tattoos performed by British Armed Forces, Commonwealth and international military bands and artistic performance teams on the esplanade of the famous Edinburgh Castle in the capital of Scotland. The event is held each August as part of the Edinburgh Festival. 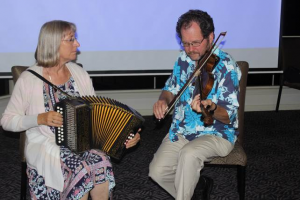 Grace Kelly and John McRae, then presented a number of renditions of popular songs with Grace playing the accordion and John on the violin. The duo certainly showed a different side to themselves as John is handing the additions to the ‘MacRaes Down Under’ so is currently pursuing all additions and changes before issuing a full list of updates is issued later. 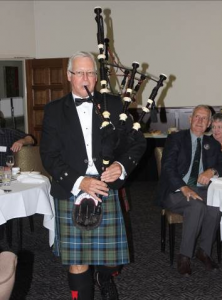 The final presentation ended with many forming themselves into a circle to sing “Auld Lang Syne”, which was based on the poem written down in 1788. The phrase “Auld Lang Syne” basically translates as “for old times’ sake”. The song is well-known to be about preserving old friendships and looking back over the events of the year.

It was quite late when the last of the gathering members wound up. What a great evening.4 On Sunday locals Joe and Jill Wooding from the Albury District Historical Society conducted a Historic Tour of Albury, left.

Our tour proved most interesting and included visiting the old Railway bridge opened in 1883, the War Memorial and the last stop on the Great Southern Railways line, the 450m Albury Railway Station which was the transfer point for the change in rail gauge between N.S.W. and Victoria as well as the former Albury Station Master’s Residence designed by Henry Deane and constructed in the early 1880s. Other spots included the inscribed tree by the riverbank by explorers Hume and Hovell. 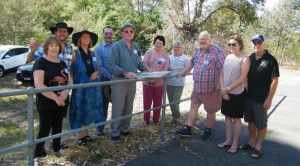 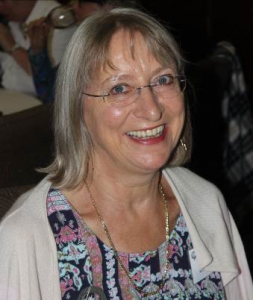 Grace Kelly travelled all the way from Camberwell in Victoria. 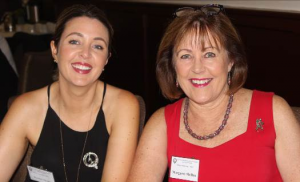 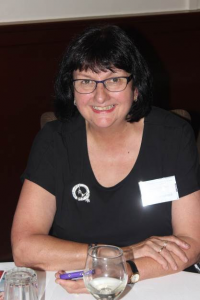