With the gates opening at 6am there was certainly plenty of movement by 7am when we arrived. The numerous Clans, stallholders and bands were already beginning to set up their individual marquees and put out their signage, information, displays and wares for the sixth annual Canberra Highland Gathering & Scottish Fair. It was Saturday 8th October and a glorious day once again. With the rainfall over the previous weeks the venue was in a lush condition and just freshly mown. The day had arrived for the long awaited traditional Scottish Highland Gathering being held on Kambah Oval in Kett Street in Kambah in the ACT.

Our local Canberra stalwart Peter Sillis (McRae) soon arrived with the marquee and we set about getting things in order. With Jenny Amey, Peter Sillis, Colin and Roslyn MacRae and myself we were soon set-up with the various flags flying and the Clan MacRae signage in place. Then came the various images of Eilean Donan Castle around the walls along with other MacRae information so we were soon ready for the onslaught of various MacRaes/McRaes and other visitors. The display of MacRae family and Scottish artefacts were also set up for the interest of the Mac Raes and various other visitors to see.

Along with all the pipes and drums the Clan representatives marched up in front of the official guests. As part of the ceremony each Clan representative verbally acknowledges that they are in attendance at the Gathering before the several speeches begin.

Again the Chieftain of the Day was Mr Mick Gentleman MLA, Member for Brindabella and Minister in the ACT Government, and is currently Minister for Planning; Workplace Safety and Industrial Relations; Children and Young People; and Ageing. He does an excellent job and visits all the various Clan marquees. He extended his congratulations to the organisers on the ever enlarging event and all that had taken place since the event was re-established in 2011. He was impressed with the number of things happening on the grounds.

[Photo] Mr Mick Gentleman MLA, Member for Brindabella and Minister in the ACT Government, opening the 2015 Canberra Highland Gathering & ACT Pipe Band Championships with Allan Smith, one of the organisers and Colin MacRae of Bathurst at the back.

News of the event is getting around more and more each year and visitors flocked to the Gathering which was open to the public from 10am through to 5pm. Being a free day the crowds appeared in hordes all throughout the day, some on their way to and from dropping the children at sport. As usual there were oodles of grandparents, families and children, dogs on leashes and people in varying costumes who came to witness the occasion.

There wasn’t too much time before the various Clan representatives were rounded up and asked to gather at the marshalling area in preparation for the impressive Grand Parade. The parade is traditionally part of the Opening Ceremony and commenced on time at 10.30am. What a spectacle this is and accordingly attracted a large crowd. Besides the Clan MacRae Society of Australia and New Zealand, represented by Allan Smith Vice President in the parade, some of the other Clans included Clan Cameron NSW Inc, Clan Buchanan, Clan Campbell Society NSW, Clan MacLennan, Clan Macpherson Association, Clan Lamont Society of Australia, Clan Farquharson Association Australia (NSW Branch), Clan MacNichol, Clan Johnston/e, Clan MacNeil, Scottish House Australia, Scottish Australian Heritage Council, Clan Munro, Clan Sutherland, Clan Gunn Society, Edmonstone Clan Society, Clan Lindsay Society of Australia, Clan Donald and Clan Gregor Society.

Each Clan representative carries their individual and imposing tartan clan banners. Possibly the most favourite spot, especially for the children, is in the ‘Kid’s Zone’. It is always a hive of activity for all ages and there is plenty of goings-on to do and participate in. There are children clamouring all over the jumping castle and crowds are lined up to have the face painters change their looks to some favourite character. Organisers had prepared children’s games that were popular and took place during the day. The Fire Brigade was there to support the event. The attendance of Kenny Koala and Prime Possum was another highlight for the children and brought more fun for the families, as well as lots of photos with these popular icons.

Leading Senior Constable Kenny Koala passed along a lot of good advice to the children. The Scottish Country Dance area seems to get bigger and bigger each year and the contestants seemed younger and younger. The dance groups set their feet tapping as each of them gave crowd-pleasing performances all day long. With all contestants immaculately dressed for each routine the adjudicators keenly watched each act to award the points. Age was no barrier as the very young went through their routines. As each group set up and with the music of the pipes commencing people would come back to watch enactments such as the Highland Fling, Sword Dance, Seann Triubhas and the Full Tulloch. The skirl of the bagpipes stirred up the Scottish blood in the large marquees which were specially erected for the inspirational displays of highland dancing.

Many were there for the traditional Scottish events and activities that took place throughout the day. There was a multitude of Scottish food and market stalls which did well to keep up with the constant line of patrons and visitors. The ‘Scottish Muscle Men’ toiled in the heavy athletics events – the caber tossing, weight for height and the lifting of the stones. These objects are very heavy which means a lot of training in the gym over twelve months as they appear at other gatherings as well.

As the day long festivities drew to a close the Massed Bands produced a magnificent sound to get the hearts thumping of the many Scots in attendance. The prize giving ceremony proceeded to honour the winners in the various Championship divisions. Judges were from both New South Wales and Victoria to evaluate the bands for the trophies which included the Champion Band of the Day, Champion Grade 3 Band, Champion Grade 4 Band, Best Drum Corps Grade 4 and Best Dressed Band.

[Photo] President Alan McRae with one of the visitors to the Clan MacRae marquee, David Hunter.

Unfortunately Elma McRae, our Clan MacRae secretary was not able to be part of the day again this year. The event was again well organised by the Canberra College of Piping & Drumming and Clan MacRae would like to congratulate them on the success of the day.

In the evening some members of the Clan MacRae attended the free Scottish Ceilidh Night at the Canberra Burns Club where the music was provided by “Humbug”. Clan McRae will be attending the 2017 Canberra Highland Gathering & Scottish Fair which is taking place on Saturday 7th October. The traditional Scottish Highland Gathering will again be held at Kambah Oval in Kett Street, Kambah. 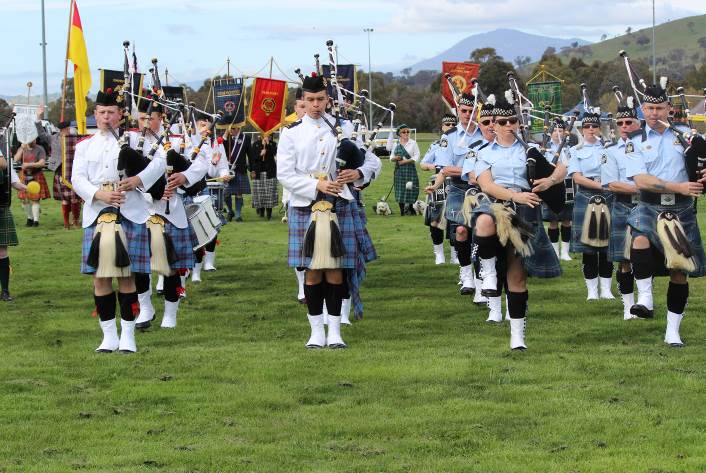 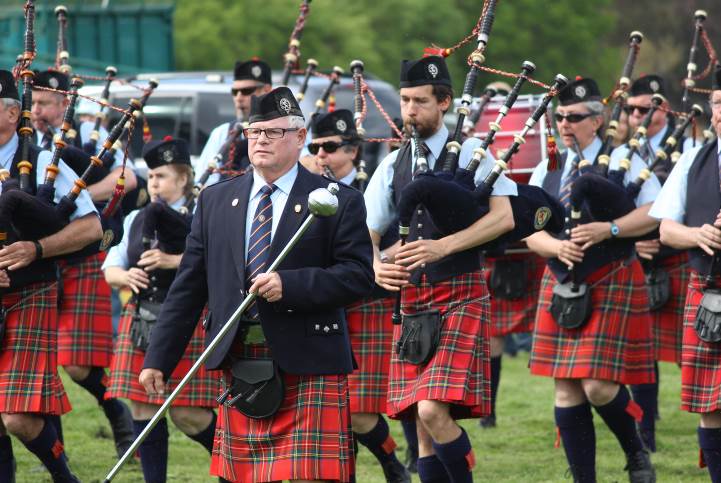 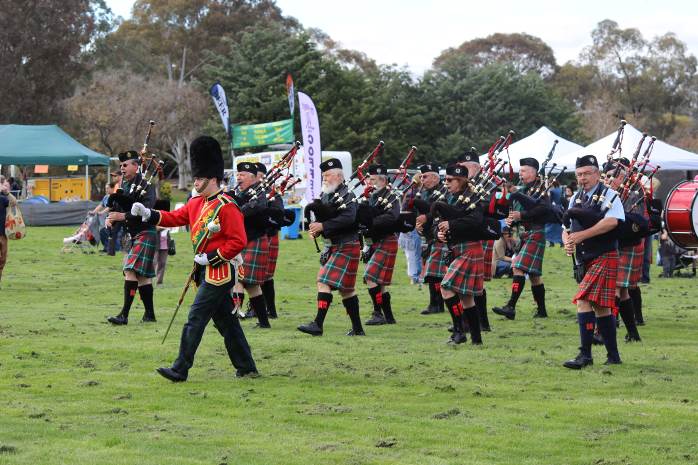 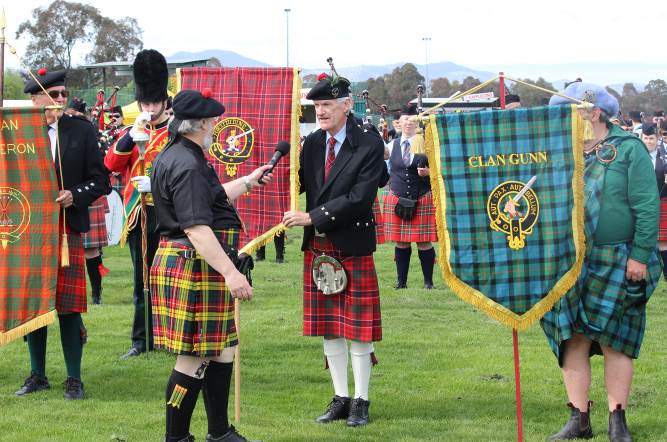 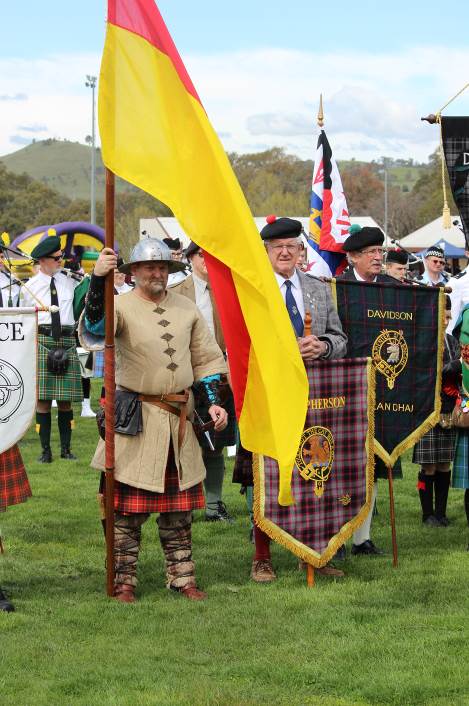 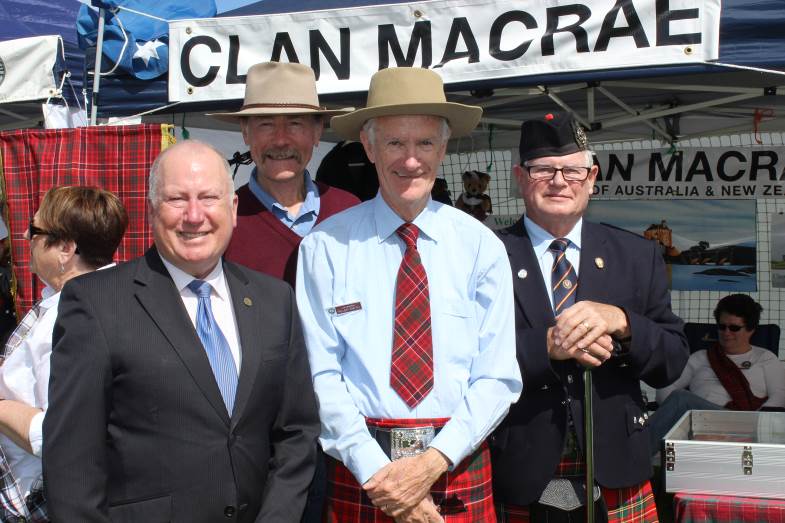 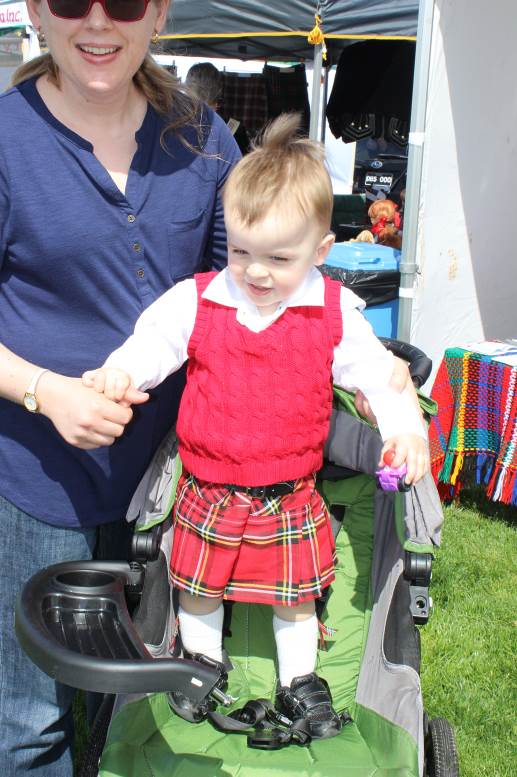 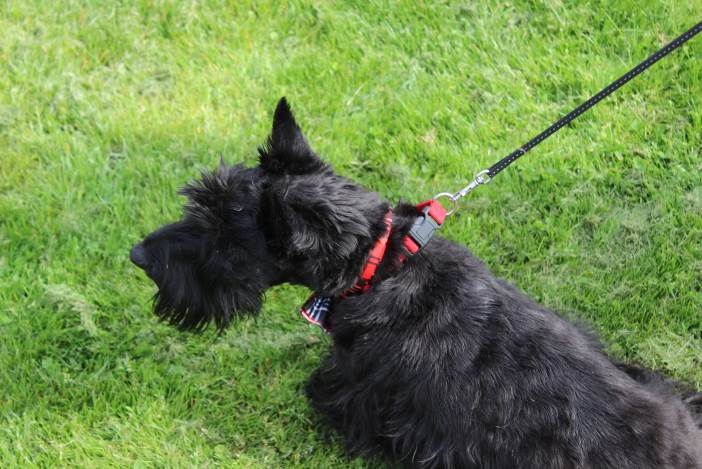 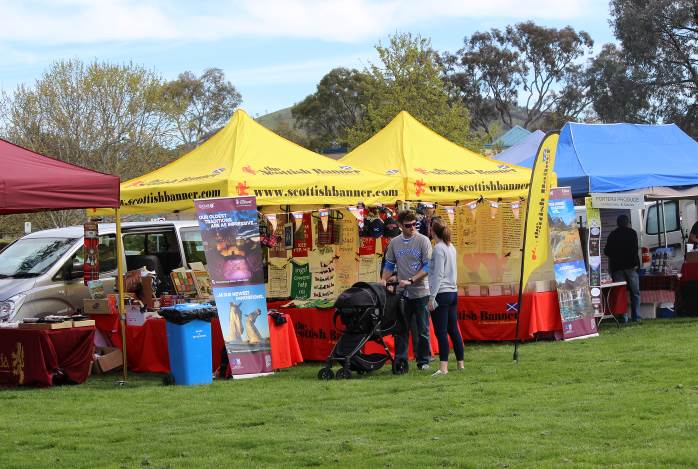 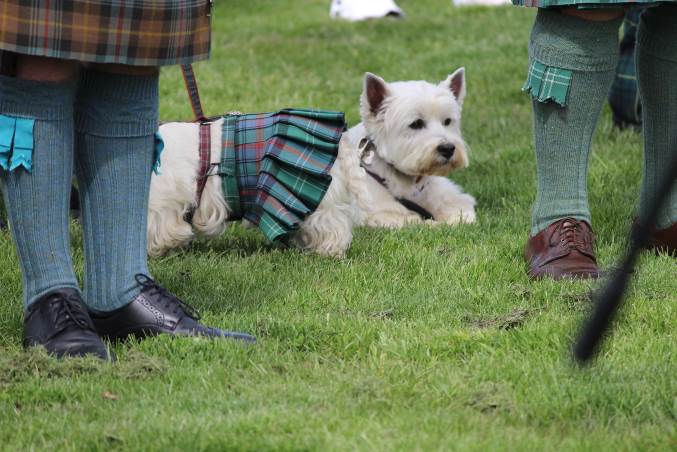 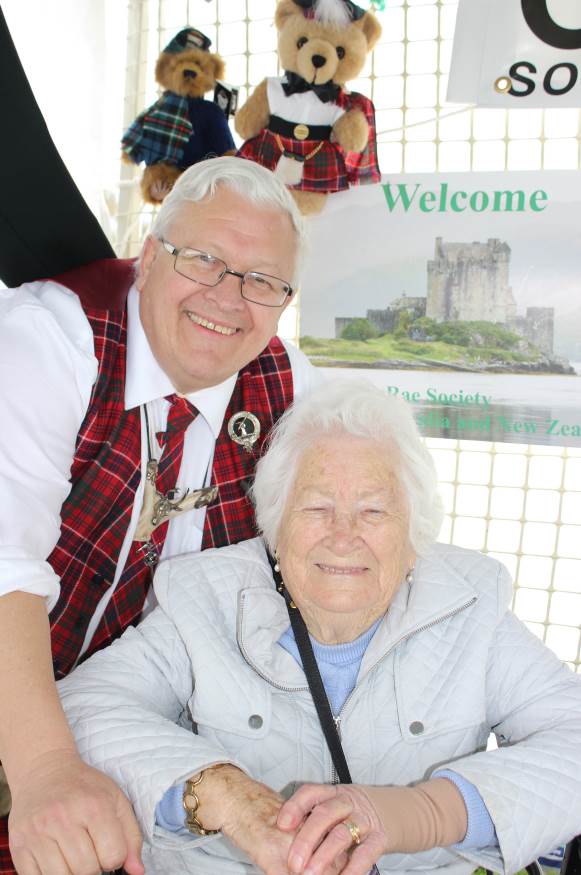 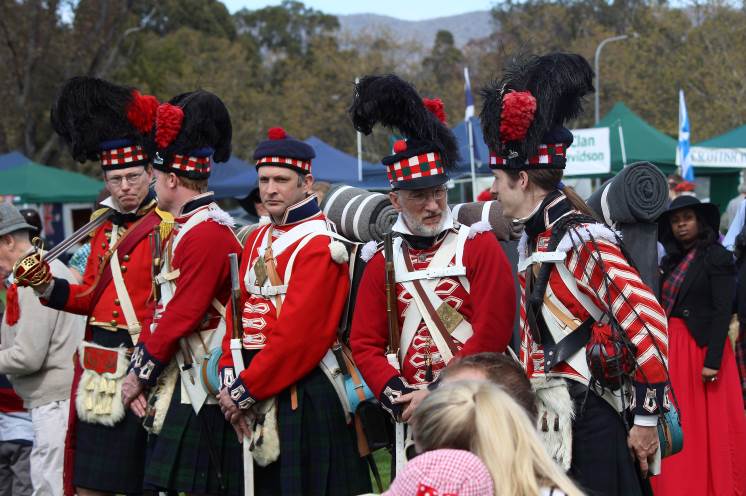 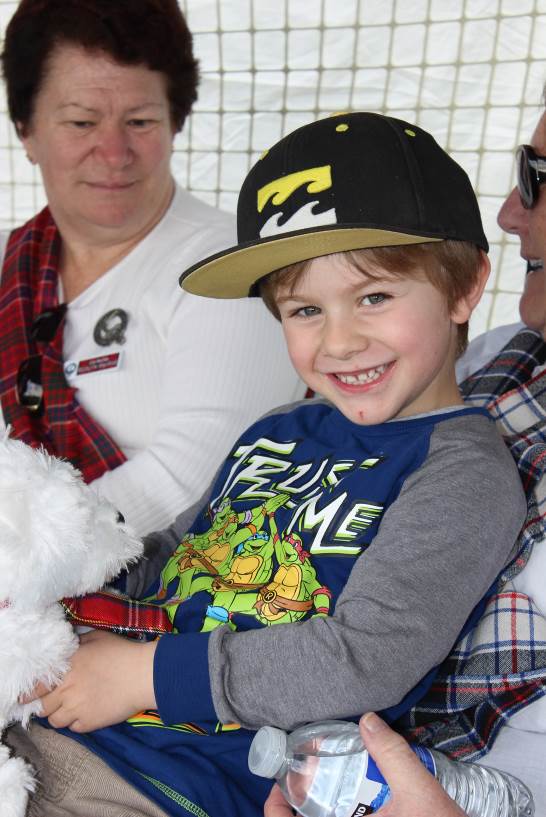 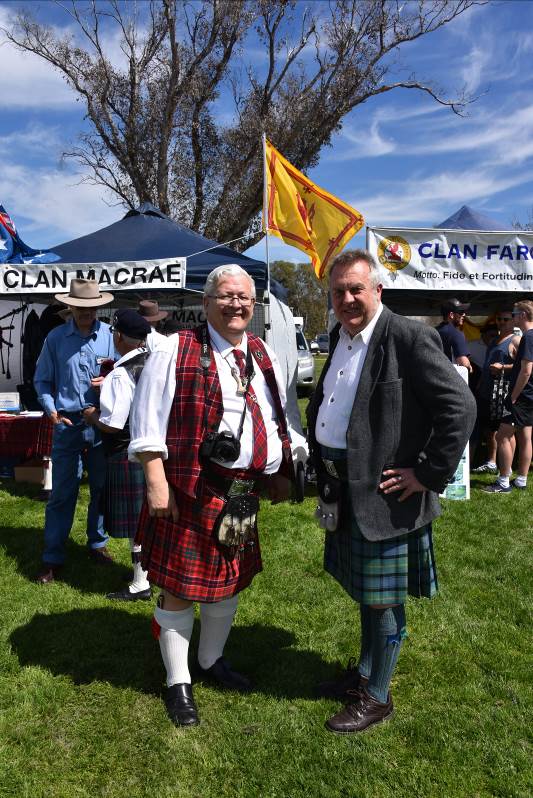 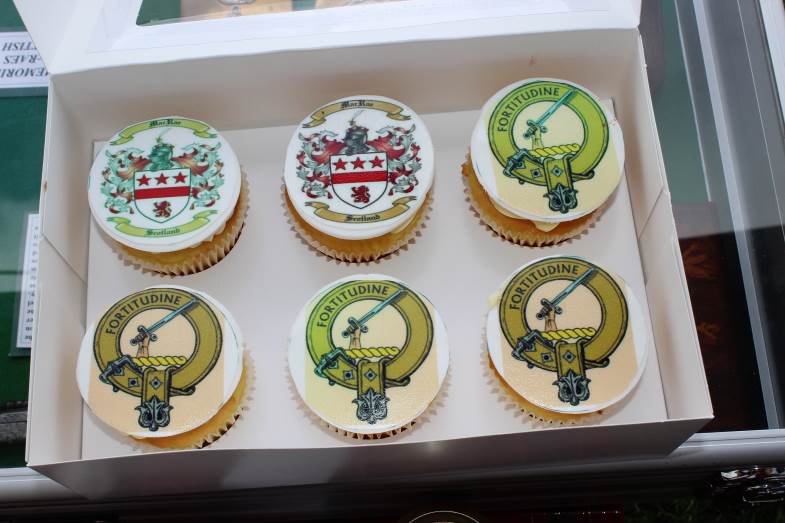 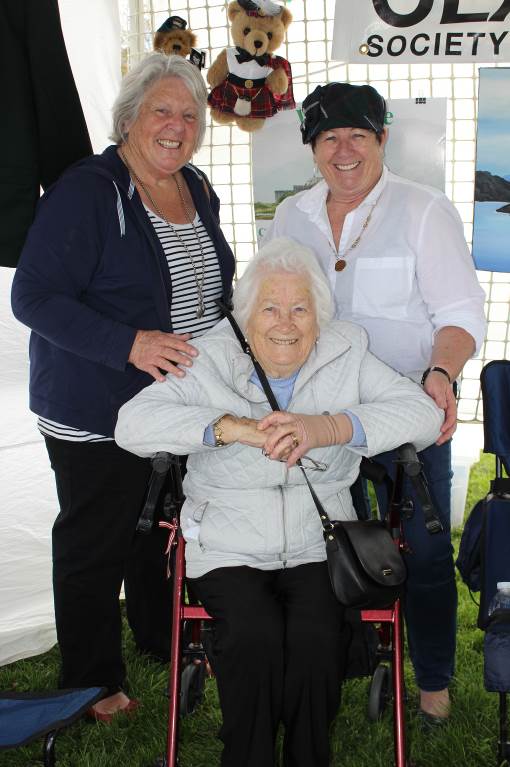 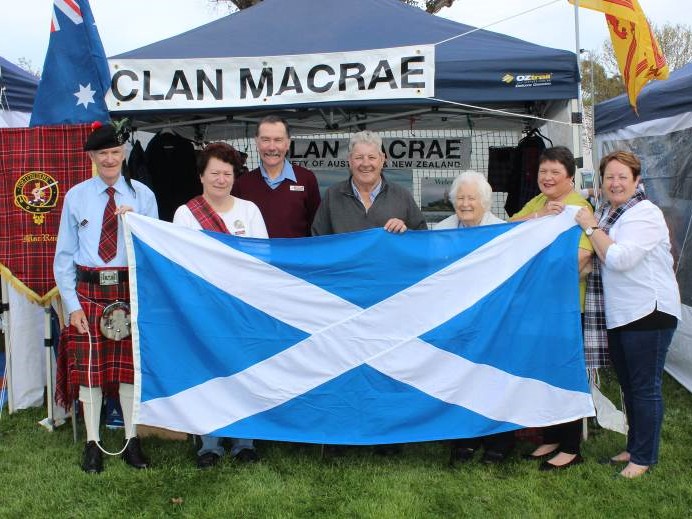 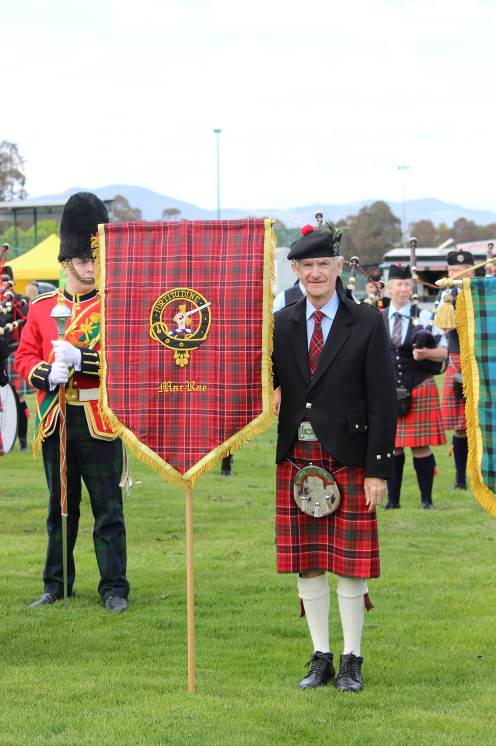