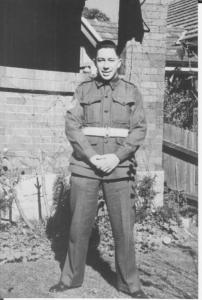 This photo was taken in either 1944 or 1945 during World War II when Gordon McRae was serving in the Australian Army Pay Corps. Gordon was visiting his sister Jean McRae who resided at Roseville in Sydney at the time.

Gordon Russell McRae was the youngest of five children of Alice and Francis Lewin Duncan McRae. Born on Thursday, 11th November 1920, in the Walcha Hospital on the New England tablelands in northern New South Wales he was to be the last of the McRae children. Ironically, Gordon was born on Armistice Day, just two years after the First World War finished.

His father Francis, or Frank as he was more popularly known, owned and operated McRae Bros of Walcha with his brother Donald Richard Cruttwell McRae. In the mid-1920s these two McRae brothers decided that there were savings to be made with two businesses buying in bulk together. Gordon’s parent and family not long after moved to Uralla in 1927 with a short stay at Barraba in between.

Almost immediately Gordon’s father was investigating suitable establishments and wholesale suppliers and was able to open McRae’s Ltd later in the year.

On completion of grade six, it was off to the Armidale High School for Gordon. He was not at the High School for long when he was sent to The Armidale School or TAS as it was usually called and became a boarder. Gordon’s best subject in High School was mathematics. Obviously seeing an opportunity to leave school after finishing and passing his Intermediate Certificate, Gordon at the tender age of 15, well almost 16, decided to apply for a job at the Armidale branch of the Bank of New South Wales as a clerk.

He had to go for an interview at the bank where the manager asked lots of questions. Times were fairly hard in 1936 with the depression still affecting the economy and so many lives so Gordon was fortunate to be successful and get the job. He started work several days later in his new suit and tie. His salary was £104 per annum, paid fortnightly.

After applying for a transfer, he was sent to Newcastle where again he had to find lodgings. The Second World War was to interrupt his banking career when he was called up by the Australian Military Force to serve Australia in its time of need. Gordon’s name had been on a ‘call-up list’. His date of enlistment is 8th August 1942, at Williamtown though he had originally put his name down in Uralla and listed his father Frank as next of kin. After a medical in Newcastle, Gordon was sent to the new recruit’s basic training camp at Rutherford, not far from Newcastle, where he learnt to march, clean his rifle and other army basics.

Here he was issued with a uniform, rifle and the Army number N151091. Gordon was issued with the standard Army rifle, a SMLE No 1 mark III which had been manufactured at Lithgow’s Small Arms Factory just a few miles from where he would later live in Portland for many years. Often new groups of recruits were asked if anyone was a mechanic, cook, or “worked in a bank” depended what special needs the Army required at the time.

Following the basic Army training Gordon joined the clerical staff of Headquarters, 1st Brigade A.I.F. in late 1942. The change meant that he was now with the Australian Infantry Forces (A.I.F.) so he was given a new number – NX124161. Gordon remembers that while with the 1st brigade he did a number of “obviously useful Army courses” (though he couldn’t see any use at the time and didn’t see any more later but it kept them occupied) such as a “water course” which involved learning about water treatment, sediment rates and tank capacities.

Following this he moved to the A.A.P.C., the Australian Army Pay Corps which had been originally formed on 21st September 1914 and disbanded afterwards but was reformed again prior to World War Two being declared. This meant a fair bit of travelling by Army truck and train to places as scattered as Kapooka at Wagga Wagga, Sydney and Holsworthy Army Barracks and other Army camps.

The Bank of N.S.W. subsidised Gordon’s Army pay making up the difference from what he would have received if working for the bank though this practice was done for all previous staff. One assumes that this ensured that the Bank would get their staff back after the war. 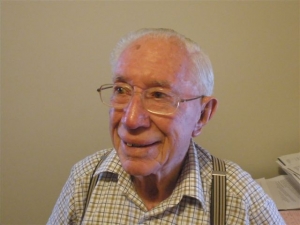 He recalls one visit home for a short leave to stay with his parents and his mother’s home cooking. Later in the war he was ordered to move to work at Concord Repatriation Hospital in Sydney as a pay clerk. By now Gordon had been promoted from Sergeant to the rank of Staff Sergeant. Gordon says that another man challenged him about his promotion as the other man claimed he was more deserving.
Gordon returned to Uralla in May 1946 in time for the local Victory Day Celebrations. The Uralla Times reported that “Staff Sergeant Gordon McRae is at present home on leave and has received his discharge from the Army. Gordon will resume his duties with the Bank of New South Wales, in Cessnock.” The McRae family business was to have an input into these celebrations as the Victory Day Celebrations Meeting minutes attests – “The arrangements for the music was left in the hands of the Town Clerk who requested that McRae’s P/L install their loud speaker set for the public demonstration in Alma Park and parade, the latter to assemble at 10.30am.”

After almost four years in the Army Gordon was discharged on 5th July 1946. During the Second World War more than 7,000 soldiers were to serve with Gordon in the Australian Army Pay Corps, which was disbanded after the war, later in 1946.

Gordon celebrated his 90th Birthday on 11th November 2010, with many of his family and friends attending in Bathurst.