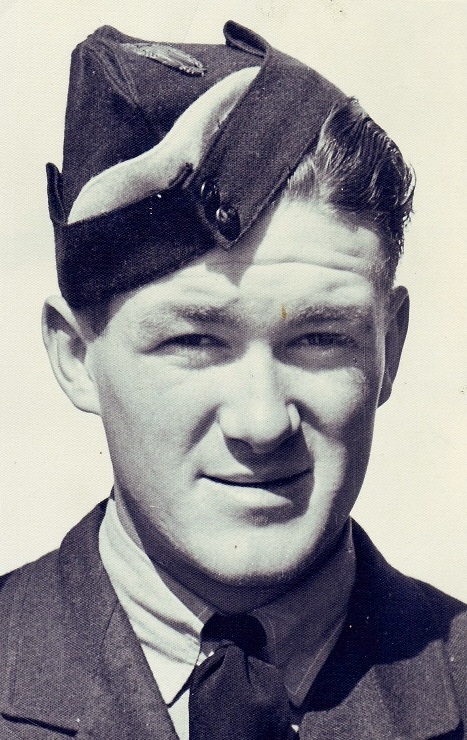 A number of years ago upon visiting the Australian War Memorial in Canberra I made enquiries as to the circumstances surrounding the death of my great-uncle Keith McRae Smith. All that they could tell me was that he was a Flight Sergeant in the RAAF and as a pilot was serving with 226 Squadron RAF. As to his death all they could say was that he was killed in an air battle over France on the 8th November 1943 and that was that.

Since then I have researched defence archives and after receiving immeasurable help from members of the 2nd Tactical Air Force and Medium Bombers Association I have been able to piece together this story of my late great-uncle.

On the 16th of November 1943 Colin Smith Jr of Coonamble, New South Wales, Australia received a telegram advising him that his brother, Flight Sergeant Keith McRae Smith RAAF then serving with 226 Squadron RAF was listed as ‘missing on air operations’.

Keith was born on the 21st of July 1922 the 13th child of Colin and Mary Smith at ‘Flodden Field’, a sheep station near Coonamble, New South Wales. Keith’s mother, Mary Isabella Smith nee Hall was the daughter of James Hall and Christina Mary McRae. Christina McRae was the daughter of Christopher and Catherine McRae and a member of the large McRae family of Merriwa, New South Wales.

After failing to complete his Intermediate examinations Keith left school at age 15 and lying about his age applied to join the RAAF. He was however rejected for service and soon found work as a general labourer and station hand in the local district. In the years preceding the outbreak of the war first Keith’s mother and later father died from illness and when war was declared in September 1939 he was working as a mechanic in a sawmill at Gwabegar, New South Wales.
Keith enlisted in the RAAF on the 16th of August 1941and after initial training was selected for aircrew. After the completion of training at No. 5 Elementary Flying Training School located at Narromine, New South Wales he was posted to Canada to undertake further training under the British Commonwealth Air Training Plan. Keith embarked from Sydney, Australia aboard the SS President Monroe on the 24th April 1942 and after arriving in Canada was selected for training as a bomber pilot. Keith continued his training firstly at No. 10 Service Flying Training School, Dauphin, Manitoba and later at 34 Operational Training Unit, Pennfield Ridge, New Brunswick. After completing his training in Canada Keith was eventually posted to 13 Operational Training Unit, Foulsham, England on the 25th May 1943.

On the 28th of August 1943 Keith was posted to 226 Squadron RAF then based at Swanton Morley in Norfolk. Keith aged 21 and like so many others of his generation now found himself the pilot of a ‘state of the art’ Mitchell II medium bomber. His Log Book indicates that he began flying with the squadron on the 1st of September 1943. In the period 1st to the 15th of September he undertook further training flights with the squadron. On the 16th of September 1943 he flew his first operational mission with 226 Squadron when he took part in the bombing of the power station 3 miles south west of Rouen.

Throughout October of 1943 Keith took part in a number of Air-Sea Rescue sweeps along the English coast and undertook further training flights. On the 8th of November 1943, Keith along with other pilots and crews of 226 Squadron was detailed to carry out a high level bombing raid on the ‘construction site’ at Mimoyecques, in the Pas de Calais region of France. An earlier raid had been undertaken on the 5th of November 1943 and since this raid the Germans had strengthened the air defences in this sector. What was not known by the allied aircrews at this time was that the ‘construction site’ at Mimoyecques was in fact a massive subterranean fortress which had been built to house the new V3, rocket assisted long range guns. There were 25 of these long range guns at the site and the Germans planned to fire 600 projectiles an hour all aimed at and capable of bombing London. The site itself was protected by 5 metres of reinforced concrete and extended to a depth of 100 metres below ground level. At 30 metres a railway station had been installed to provide a direct re-supply link to Boulogne and Calais. Mimoyecques was classified as a priority target.

At approximately 0930hrs on the 8th of August 1943 aircraft from 226 Squadron under the command of Wing Commander C. E. R. Tait made their approach to the target at Mimoyecques. The aircraft were flying in a ‘box formation’ of 6 aircraft at approximately 10,000 feet. The lead aircraft was piloted by Squadron Leader Bill Gray which had as a member of the crew Flight Lieutenant Edward ‘Ted’ Gill. Flight Sergeant Keith Smith and his crew of Canadians were in aircraft No. 3 which was to the port-rear of Squadron Leader Gray’s aircraft. It was during this approach that Mitchell FV927 R, piloted by Flight Sergeant Keith Smith was observed receiving a direct hit to the port engine and wing fuel tank. The port wing and fuselage immediately burst into flames, the aircraft then dived steeply and began spiralling into the ground. Flight Lieutenant Ted Gill who was in the lead aircraft during the attack stated that what he most remembered about this operation was the aircraft which burst into flames when hit by flak on approaching the target. A letter written by the Commanding Officer, Wing Commander Tait on the 9th of November 1943 stated that “observers in other aircraft reported as having seen three parachutes opening, so it may be assumed that three members of the crew were able to leave the aircraft before it crashed”.

The only other aircraft of 226 Squadron which was damaged during the attack was Mitchell FV939 B, piloted by Wing Commander Tait. His aircraft was hit by flak and one crew member was injured. Wing Commander Tait managed to nurse his aircraft back to England where it crash landed in a field just short of Manston. No other injuries were sustained by the crew of this aircraft.

On the 4th of February 1944, Keith’s brother Colin Smith received a telegram advising him that Keith, previously reported as ‘missing’ was now reported as ‘missing believed killed’. On the 16th of May 1944 Colin received notification that Keith was officially listed as being ‘killed in action’ this notification being confirmed by the International Red Cross from Geneva. The location of his body and that of his crew was however unknown. For the brothers and sisters of Keith that was to be the end of the story until the results of an enquiry into the events of 8th November 1943 were forwarded to them in late 1948.
In March of 1947 the RAF No.1 Missing, Research and Enquiry Unit undertook an investigation into the events at Mimoyecques in early November 1943 and in particular the fate of FV927 R and its crew. The investigation, conducted by Flight Lieutenant R.F. Goldstein RAF confirmed that an RAF medium bomber had crashed near Mimoyecques on the morning of 8th of November 1943. Flight Lieutenant Goldstein’s investigation also confirmed that only three bodies were recovered from and near the wreckage, that of Flight Sergeants Keith Smith RAAF, Carl Berg RCAF and Joseph Grenier RCAF. A number of the villagers of Marquise stated that late on the 8th of November 1943 German soldiers brought the body of a single unidentified airman from a recent crash into the village and that this airman was quickly buried with the others in the local cemetery. The villagers of Marquise also testified that shortly after the burial all of the bodies were exhumed by the Germans in order to retrieve their flying boots. Further investigations and statements from local witnesses confirmed that the last unidentified airman was in fact the fourth member of the crew, Flight Sergeant John Cowieson RCAF who had somehow managed to extricate himself from the damaged aircraft and open his parachute. It was reported that he had been shot while ‘chuting down’. All four of the crew were initially buried in the cemetery of Marquise, three of them in a common grave.

On the 21st September 1948 the family of Flight Sergeant Keith McRae Smith received confirmation that as the result of an investigation into the events of 8th November 1943 the remains of the crew of FV927 R had been identified and were now buried in the Canadian War Cemetery, Leubringhen, Calais. The officer who informed the family of the results of the investigation, Squadron Leader D.A. Wright RAAF stated in his letter that “this case has been, to say the least of it, rather complicated” and regretted the time it had taken to inform the family.

As a postscript to this story, located within the remains of the V3 site at Mimoyecques is a memorial dedicated to the allied airmen who died during air raids on the site between 1943 and 1944. Whilst the aircraft number listed for the 226 Squadron aircraft is incorrect (reading as FV929 instead of the correct FV927) the sentiment of the memorial is greatly appreciated.

“A LA MEMOIRE DES AVIATEURS VICTIMS DES RAIDS SUR ‘MIMOYECQUES’
EQUIPAGES DES
MITCHELL’ FV929, 226 SQN RAF – 8.11.1943
LANCASTER’ ME743, 44 SQN RAF – 27.6.1944
HALIFAX’ LK728, 347 SQN RAF – 6.7.1944
(FORCES AERIENNES FRANCAISES EN GRANDE-BRETAGNE)”
In the preparation and writing of this article I am indebted to the following members of the 2nd Tactical Air Force and Medium Bombers Association, Mr Edward ‘Ted’ Gill, for his generosity and fantastic memory in recalling the events of 8th November 1943, Mr Arthur Eyton-Jones who, as a member of 226 Squadron piloted FV927 R on a number of earlier operations and Mrs Sarah Morris, wife of Bill Morris of 342 Squadron for her support and good wishes.
Michael Smith
30 December 2011