The weather was fine and just perfect for the large number of attendees at the well organised 2014 Canberra Highland Gathering and Scottish Fair at Kambah in the ACT on Saturday 11th October with the Clan MacRae Society of Australia and New Zealand having their Clan tent. With just a light breeze to keep all our Scottish and other flags swirling and so many dressed in the various tartans, the day began with the massed pipes and drums along with a representative of all the Scottish Clans in attendance marching up to the official dais to be received by Mr Mick Gentleman MLA, Member for Brindabella and Minister in the ACT Government, standing in for the Chief Minister. 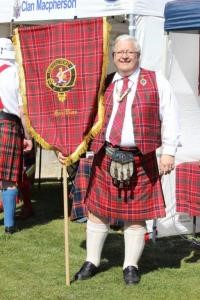 With matching tie and hatband, Mr Gentleman was presented with a haggis as part of the opening ceremony. There were a number of presentations also.

Each Clan representative carries their Clan banner and starts at the rear of the massed bands and ends up in the front for the opening ceremony. There were even the well-behaved compact, short-legged, sturdily-built Scottie dogs in this parade with either their black or light coloured wiry, weather-resistant coats. These Scottish terriers originated in Scotland and added to the general ‘Scottish’ atmosphere of the day.

Both brass and pipe bands took part in the day, the brass band’s brightly coloured, red and black uniforms contrasting with the tartans of the pipe bands. 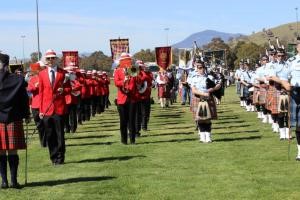 Photo (left) – Part of the massed bands during the Official Opening and presentations. 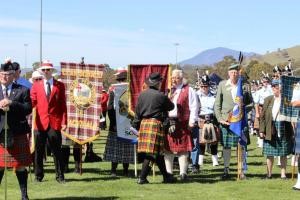 Photo (right) – As part of the Opening Ceremony they bring a microphone around to each Clan so that they can state they are there. We state for example “Clan MacRae is here.”

This is the fourth Canberra Highland Gathering and Scottish Fair and the ACT Pipe Band Championships to be held and was certainly the best yet. The successful event was organised by the Canberra College of Piping and Drumming in Kambah and was supported by the ACT Government’s community centenary initiatives fund and other sponsors.

Later Mr Mick Gentleman, who is currently Minister for Planning; Workplace Safety and Industrial Relations; Children and Young People; and Ageing, came around to each of the Clan tents to meet individual clan representatives. 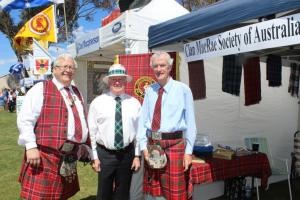 Photo left – Alan McRae, President of the Clan MacRae Society of Australia & New Zealand, Mr Mick Gentleman MLA, Member for Brindabella and Minister in the ACT Government, and Allan Smith, one of the Vice Presidents of Clan MacRae outside our Clan tent.

The Clan tents were all in one line with the list of Clans attending being the largest to date which was very pleasing and impressive to see. Some Clans are getting very elaborate signage which looks the part and is easily put up. 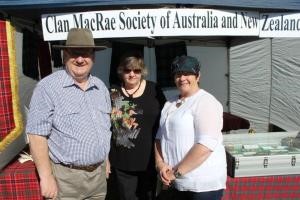 As has been the case in the previous three years the Gathering boasted many stalls and activities around the oval including Scottish produce and art and craft stalls varying from Scottish music, clothing and tartan items, hand spun items, Scottish memorabilia, family genealogy, plaques, food and drinks, music and a great deal more to entice the public.

Apart from the traditional events such as the numerous pipe bands participating in the various sections of the competition, there was some full-on highland dancing displays and competition involving youngsters to the older generation. 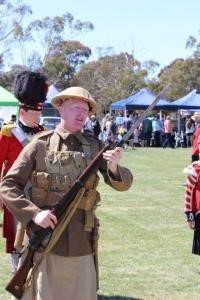 Photo (left) – One of a number of demonstrations took place during the day – this one from World War One.

The various Scottish heavy athletics events such as the caber tossing, lifting the massive weights and more, attracted good crowds every time they were performed. The contestants obviously trained for these very days as much appeared to be carried out with relative ease. Another area had been cordoned off for the kilted strong men to show their skills and strength in the caber tossing and lifting of the stones.

Part of the heavy athletics program was the Stones of Manhood competition which has been part of the Canberra Highland Gathering and Scottish Fair for some years. Moe Westmoreland, who travelled to Canberra from the Blue Mountains to take part in the day’s activities managed to lift five boulders ranging in weight from 100 kilograms to 165 kilograms and then sprinted the 25 metres between them in just 21 seconds to win the contest. 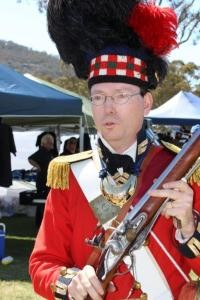 Photo (right) – A member of the 42nd Royal Highland Regiment who explained how the old firearms were used and the life of a soldier in the early 1800s as well as demonstrations throughout the day.

The skirl of the bagpipes stirred up the Scottish blood of the Scottish Country Dance groups and set their feet tapping as each of them gave crowd-pleasing performances throughout the day. Large marquees had been erected for the inspiring highland dancing displays. All contestants looked immaculately dressed for each performance which were watched keenly by the three adjudicators. It seemed that there were plenty of littlies, both lads and lassies, aged around 7 to 8 years, who were stealing the show. Every time the sound of the pipes and drums started, people headed over to watch as it certainly meant good family entertainment. As with everything it was free to watch.

How pleasing was it to see events such as the Highland Fling, Sword Dance, Seann Triubhas and the Full Tulloch, all seats were full and many were left standing.

Throughout the day we were visited by numerous MacRaes/McRaes with somewhere near 30 calling into the tent. We even had a family of MacRaes who had just arrived from Scotland some five months previously to live in Canberra. Others lived and worked in Canberra and I even found a cousin I had never met before. Some of the MacRaes had come to participate in either the dancing or to play the bagpipes. There were those who kept dropping in for another piece of Jenny Amy’s famous ‘tablet’, a traditional Scottish sweet that Jenny has mastered and something that Jenny has done every year.

As usual Clan MacRae had their Scottish-MacRae collection on display which brings the public along to have a look. It always seems to have something that interests the youngsters and the Grandmas can relate a few tales of the old days or old relations. 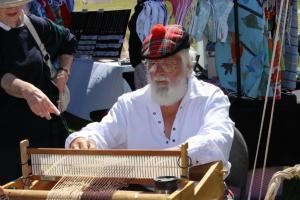 Photo (left) – Another of the demonstrations that took place throughout the day adding great interest for the public.

The event was certainly one of the largest and most successful Scottish highland gatherings in the nation and Clan MacRae of Australia and New Zealand anticipate that we will attend next year. Unfortunately our secretary Elma McRae was unable to attend though that did not stop people dropping in to see her.

I understand that the organisers of the popular event have been approached to host the Australian Pipe Band Championships in 2016, the first time that this event will have been held in Canberra.

On the night of the Gathering an efficacious traditional Scottish Ceilidh was held at the Canberra Burns Club.
I would like to thank those who lent the tent, put it up and pulled it down later, brought the refreshments along as well as manning the tent and for their efforts on the day.