Ken McRae was living in the small northern New South Wales town of Uralla when war was declared. His father, Frank McRae, was on the local committee to promote recruitment for the RAAF. Like many young men at the time he decided to enlist – to defend the nation. He had to travel to Tamworth to do his medical which he passed. In 1941 he travelled by train to Sydney to commence his RAAF training at Mascot Airport before going by ship to Canada as part of the Empire Training Scheme.

Based at McLeod in Canada, Ken continued his training using several types of aircraft including the Oxford which was a twin engine training aircraft. After completing and passing several training courses in Canada he graduated as Flight Lieutenant Ken McRae and posted to England where he was sent to Waddington, one of the many World War Two heavy bomber bases. Waddington was the home of the famous 463 Lancaster Squadron.

The 463 Lancaster Squadron was part of Five Bomber Group and after familiarisation, a Lancaster Mk 24 Bomber was assigned to Flight Lieutenant McRae and his crew. His updated model war plane had the more powerful Merlin 24 engines giving it more power than the earlier models. It had “Johnny Walker” (of the popular whisky fame) painted in the front of the aircraft with its official code ‘JOW’ He also flew on several occasions another Lancaster, if his plane was not ready or in for repairs, ‘JOD’ – ironically this latter aircraft was lost on its 93rd mission in December 1944 but another crew was flying it.
The crew of “JOW’ with Flight Lt McRae (crouching right)

Flight Lieutenant McRae’s crew consisted mainly of Australians – Navigator, Dennis Pybus (English), Bomb Aimer and Front Gunner, Jack Sweeting, Wireless Operator, Jock Plympton, Mid Upper Gunner, Frank Lynch, Rear Gunner, Dick Ivery and Engineer, ‘Blue’ Brennan. Their Lancaster was fitted with radar, but it was only turned on for short periods as the German’s had equipment that could home in on it.
Most targets were in Europe, with some 34 ‘official’ bombing raids recorded in Ft Lt Ken McRae’s Logbook, the rest of the raids are still classified secrets of Britain from World War Two. On at least three occasions the crew nursed their bomber home on three engines. Ken was often Acting Squadron Leader on missions. As any Lancaster pilot and his crew realised that once they were in the air they were totally dependent on the skill and courage of one another.

The weather was often responsible for operations having to be cancelled – either bad weather in England or bad weather over the target. Falls of snow could hold up operations for days on end.
Flight Lt McRae and his crew would often take off, fully loaded with bombs and incendiaries, with a take-off load around 63,000 lb. Some missions could take up to 15 hours in the air. With flying time, the time to prepare, go to briefings and then get debriefed on the return the men could be without sleep for 24 to 36 hours.

On one raid on the night of 21st/22nd January 1944, the Lancaster’s crew had a close shave, again. On this particular operation, the German night fighter ace, Major H.W. Schaufer, was in action – he personally shot down seven Lancasters in nineteen minutes. Several of the Lancasters were seen to fall by JOW’s crew with their own aircraft corkscrewing to avoid this particular enemy night fighter. It is interesting to note that a piece of the tail plane of Major Schnaufer’s Messerschmitt aircraft is in the Australian War Memorial in Canberra.

Ken McRae’s Distinguished Flying Cross was awarded for an operation that took place on the night of 6th/7th October 1944 during a raid on Breman with 246 other Lancasters. This raid was to be the last of some 32 major raids on this target during the Second World War and was classed as a success with 1,021 tons of bombs being dropped and with few casualties in the city. Most of the population had been evacuated. The A.G. Weser Shipyard, the two Focke-Wolf Aircraft factories and the Sieman’s Schuckert Electrical Works were very severely damaged. His citation reads – “In October 1944 this officer was detailed to attack Breman and on his way to the target was attacked by (9) nine enemy fighters, but with skilful manoeuvring they were successfully driven off and the target successfully attacked. This officer has displayed a high standard of courage and determination in the face of the fiercest opposition and as Deputy Flight Commander has set a fine example of leadership.”

Dad’s DFC (the 359th DFC to be awarded) and other medals were awarded in Canberra on his return to Australia after the war. 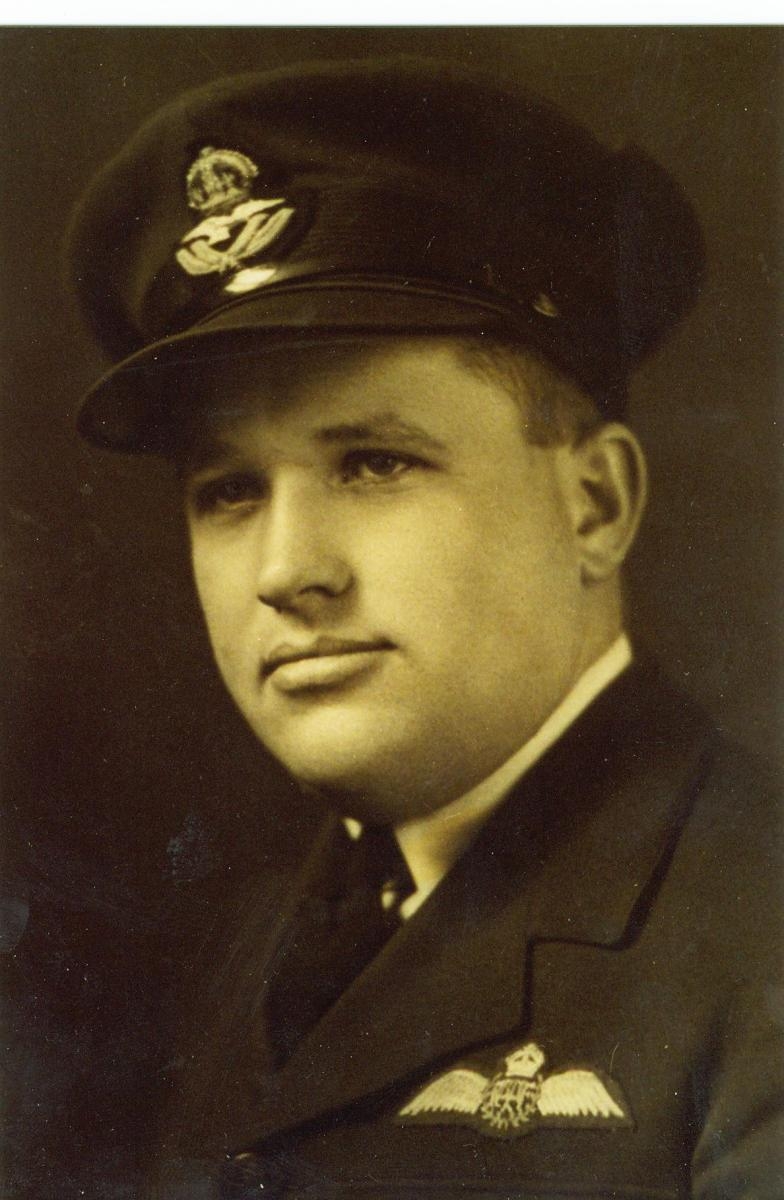 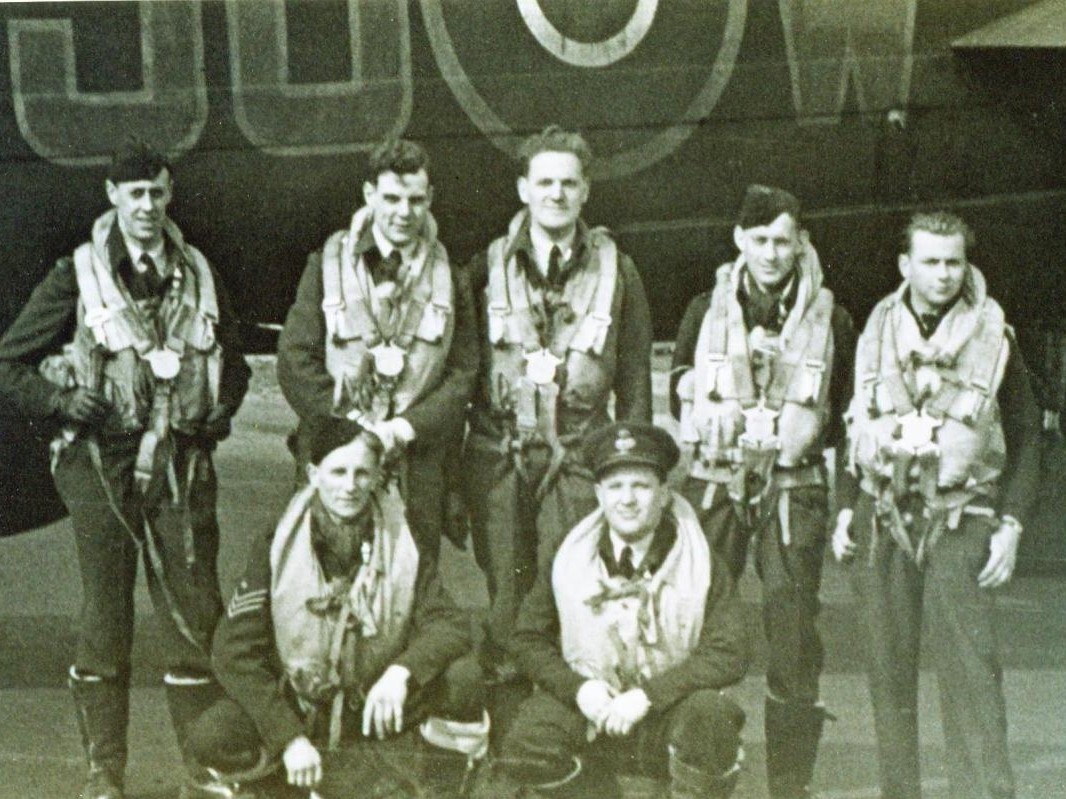 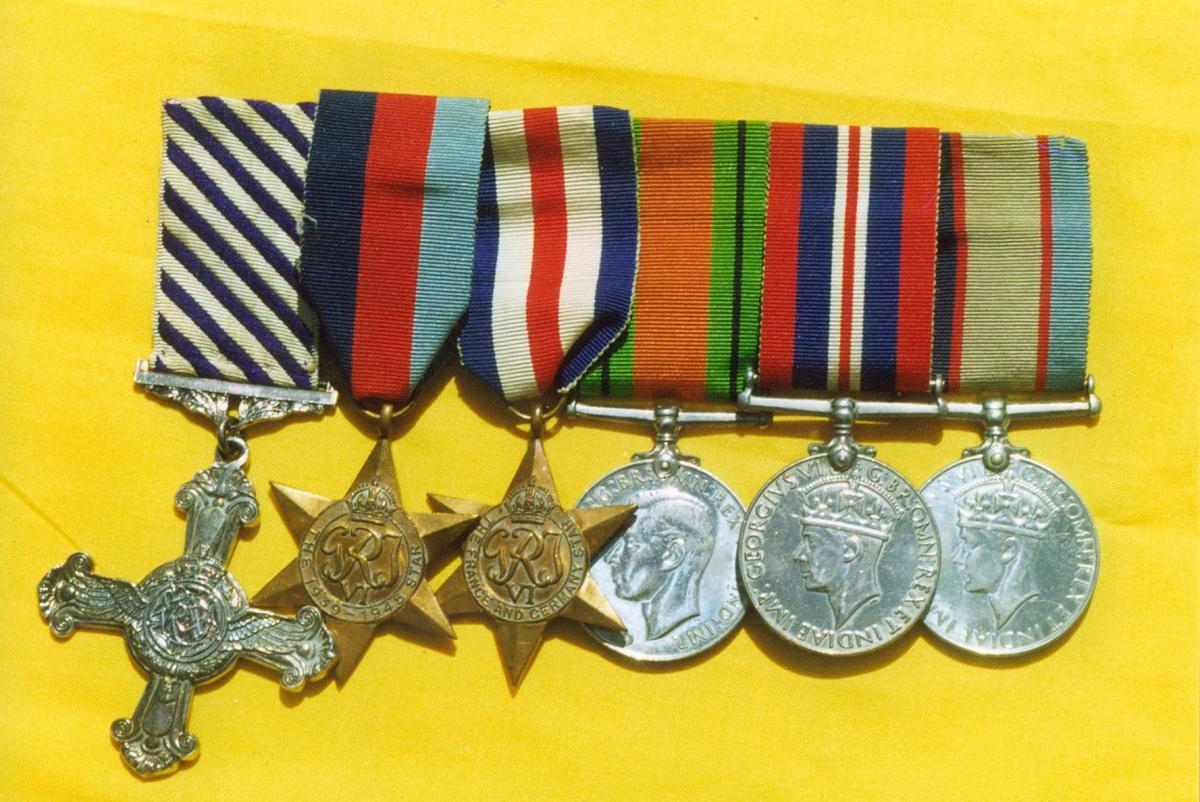