There was plenty of activity at 7am as the various Clans, stallholders and bands began set up their individual marquees for the fifth annual Canberra Highland Gathering & Scottish Fair. It was Saturday 10th October 2015 and the day had arrived for the traditional Scottish Highland Gathering being held on Kambah Oval in Kett Street in Kambah.

Canberra put on the most glorious weather though later in the day some rain could be seen falling on surrounding hills though none eventuated on Kambah Oval.

As usual Peter Sillis (McRae) arrived to bring our marquee and we were soon set-up with flags flying and the new signage in place. Thanks again Peter. In line with past years a display of MacRae family and Scottish artefacts, some going back some 600 years, was set up for visitors to see.

It wasn’t long before the various Clan representatives were called upon to get prepared for the Grand Parade which is traditionally part of the Opening Ceremony that commenced at 10.30am.

Canberra Burns Club Pipe Band was formed just over seventy five years ago and last year had a trip to Scotland where they played at the World Championships in Glasgow.

The City of Melbourne Highland Pipe Band are somewhat older having been formed in the 1890s. This band has been invited to participate in the 2016 Edinburgh Tattoo in Melbourne next year.

Along with all the pipes and drums the Clan representatives marched up in front of the official guests.

As part of the ceremony each Clan representative verbally acknowledges that they are in attendance at the Gathering before the speeches begin.

The Chieftain of the Day was again Mr Mick Gentleman MLA, Member for Brindabella and Minister in the ACT Government, and is currently Minister for Planning; Workplace Safety and Industrial Relations; Children and Young People; and Ageing.

He congratulated the organisers on the event and all the work done since the event was re-established in 2011. People flocked to the Gathering which was open to the public from 10am to 5pm.

Having no cost for admission the crowds attended in droves throughout the day. There were lots of grandparents, families and children, dogs on leashes and people in varying costumes who came to witness the occasion.

Numbers of people I talked to had never been before, “they wanted to see what goes on”, whilst others were interested in the Scottish music and culture.

During the day the Later Mr Mick Gentleman, who is currently Minister for Planning; Workplace Safety and Industrial Relations; Children and Young People; and Ageing, came around to each of the Clan tents to meet individual clan representatives. The event was again well organised by the Canberra College of Piping & Drumming.

The Kid’s Zone was a hive of activity with children clamouring over the jumping castle and many lined up to have their face’s painted.
Lucky dips were a popular idea as were the children’s games that took place throughout the day.

The Fire Brigade was on hand at this area with both young and old visiting the Guises Creek Rural Fire Brigade display. The attendance of Kenny Koala and Prime Possum were another highlight for the children brought more fun for the families as well as lots of photos with these popular icons.

The Scottish Country Dance groups set their feet tapping as each of them gave crowd-pleasing performances throughout the day.

The skirl of the bagpipes stirred up the Scottish blood in the large marquees which were specially erected for the inspirational displays of highland dancing.

With all contestants immaculately dressed for each routine the adjudicators keenly watched each act to award the points.Age was no barrier as the very young went through their routines.

Traditional Scottish events and activities went on throughout the day and the multitude of Scottish food and market stalls supported a constant line of patrons.

As each group set up and with the music of the pipes commencing people would come back to watch enactments such as the Highland Fling, Sword Dance, Seann Triubhas and the Full Tulloch.

The Scottish heavy athletics events – caber tossing, weight for height and the lifting of the stones saw the strong men’s training pay off.

As the day drew to a close of the day long festivities the Massed Bands produced a magnificent sound to get the hearts thumping of the many Scots in attendance.
One probably wouldn’t expect to see a cockatiel at a Highland Gathering but we did!

The prize giving ceremony proceeded to honour the winners in the various Championship divisions. Judges were from both New South Wales and Victoria to judge the bands for the trophies which included the Champion Band of the Day, Champion Grade 3 Band, Champion Grade 4 Band, Best Drum Corps Grade 4 and Best Dressed Band.

Unfortunately, Elma McRae, our Clan MacRae secretary, and Jenny Amey were not able to be part of the day this year and we missed them. 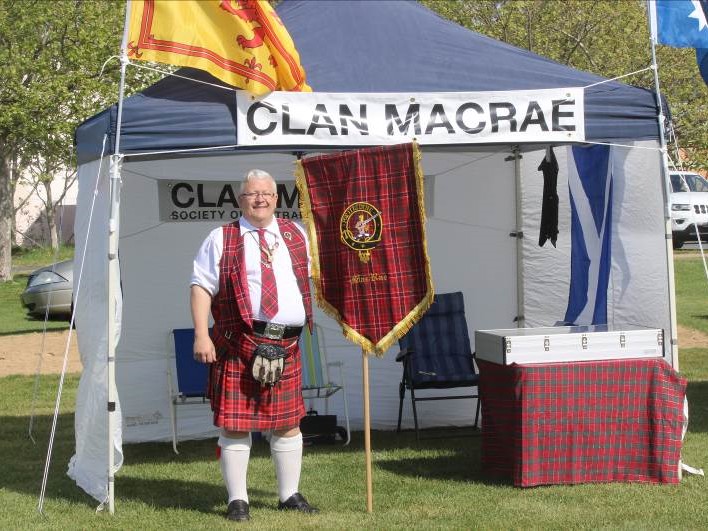 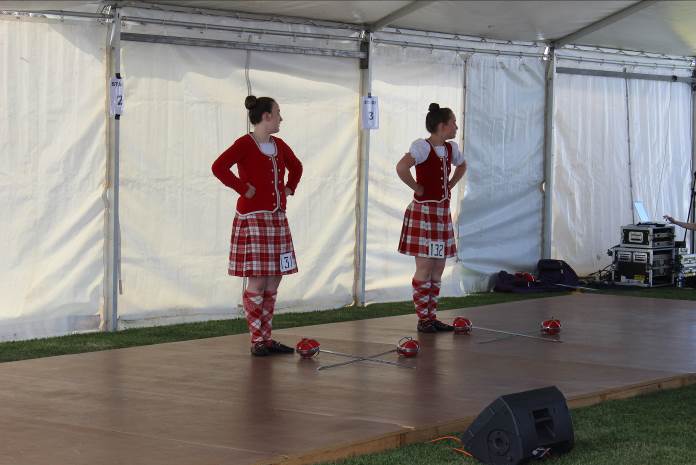 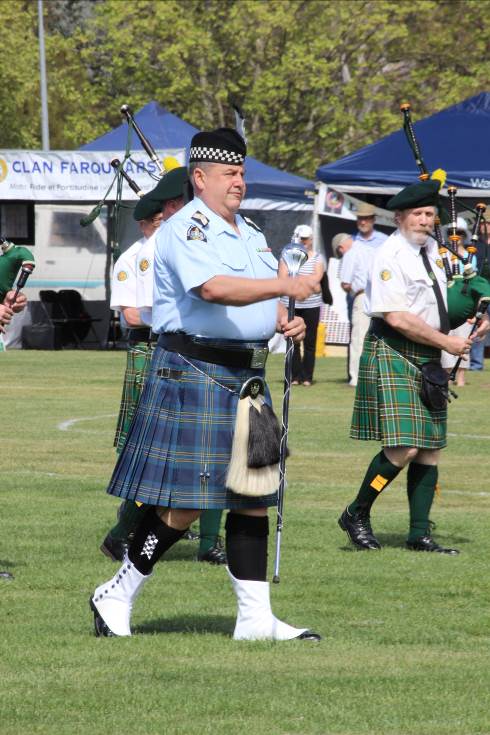 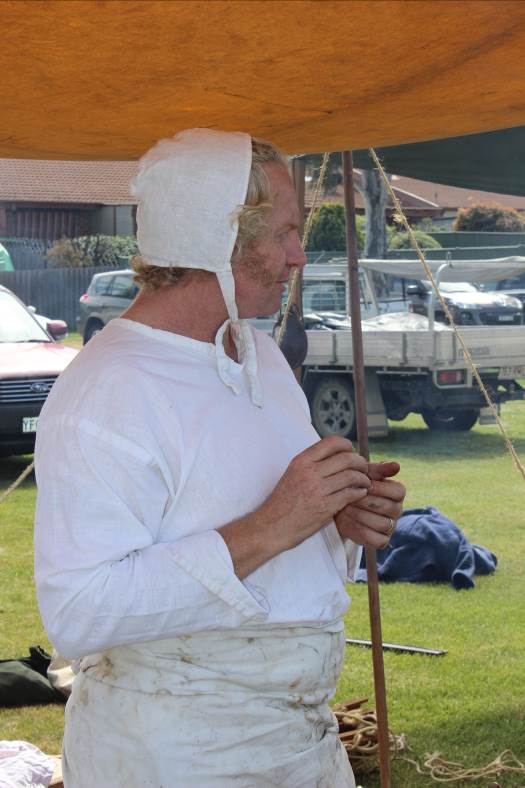 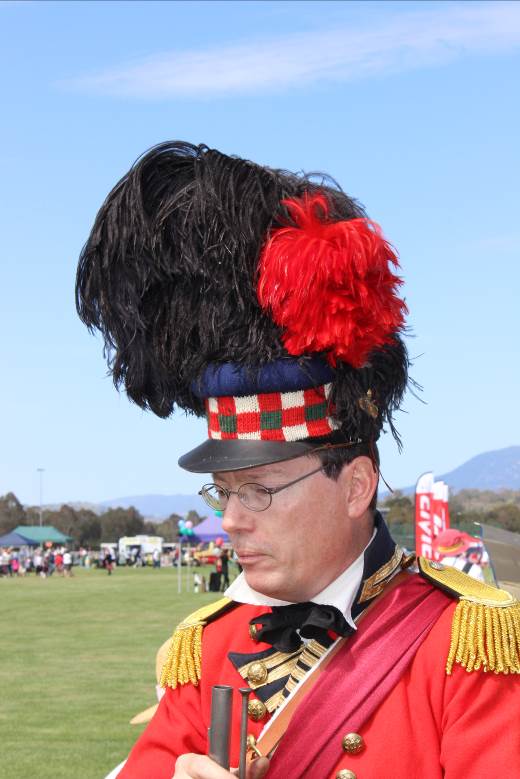 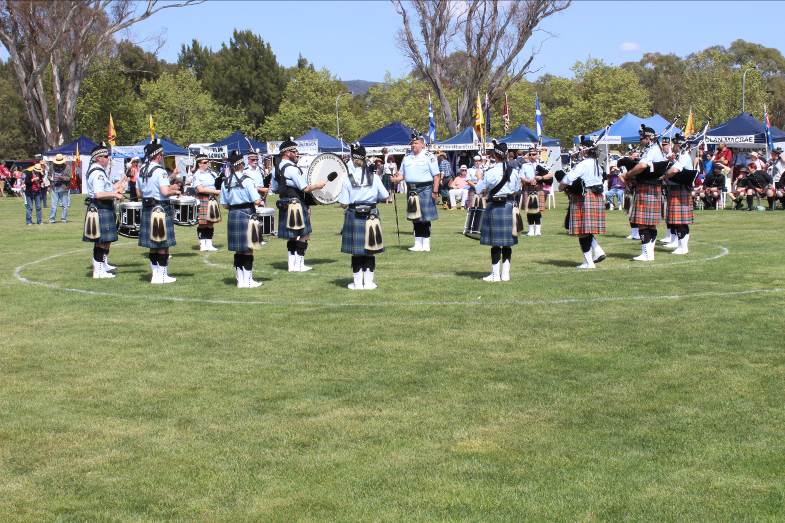 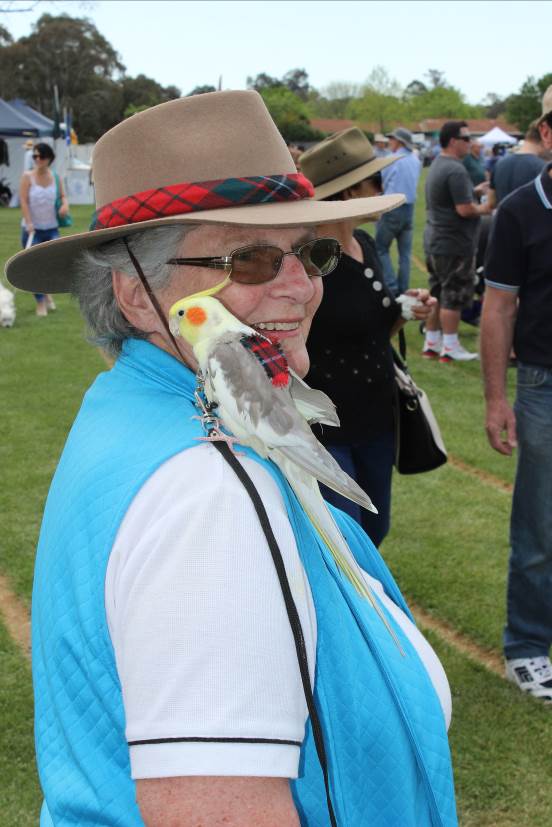 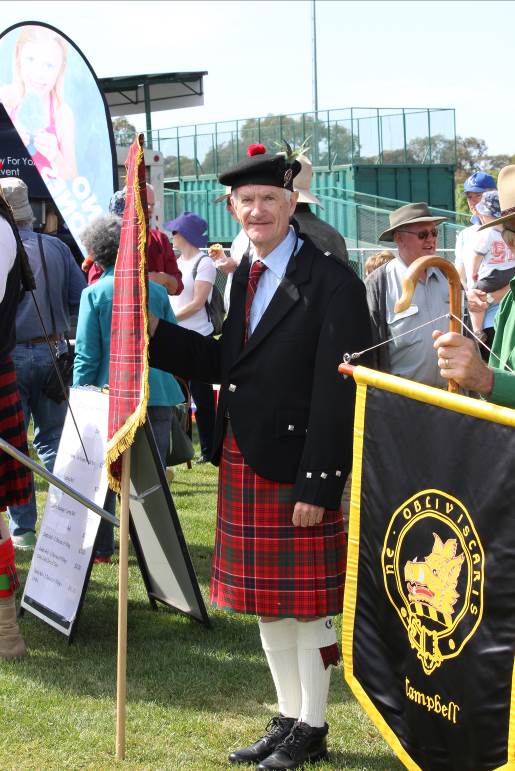 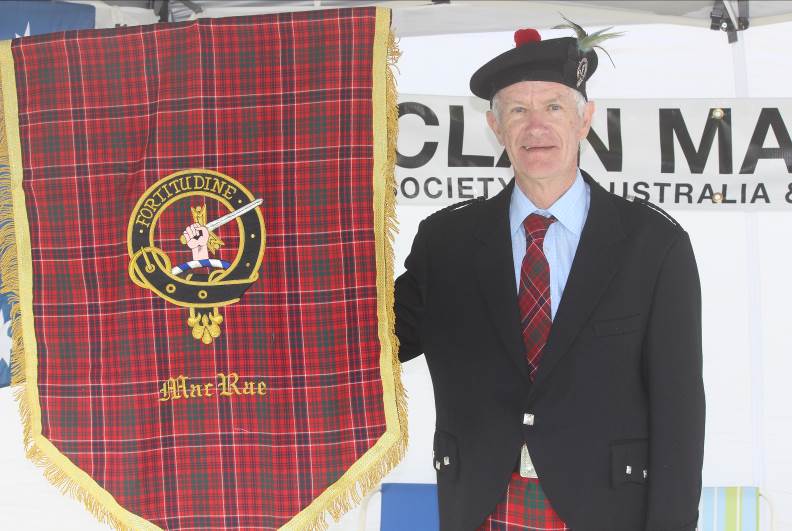 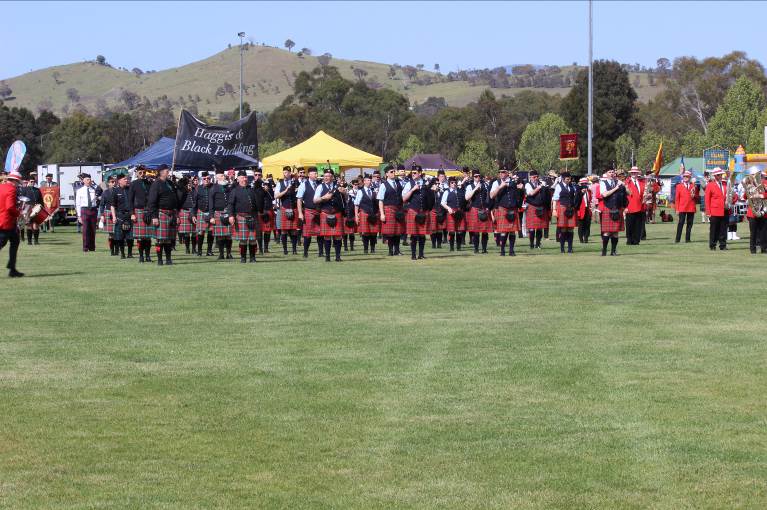 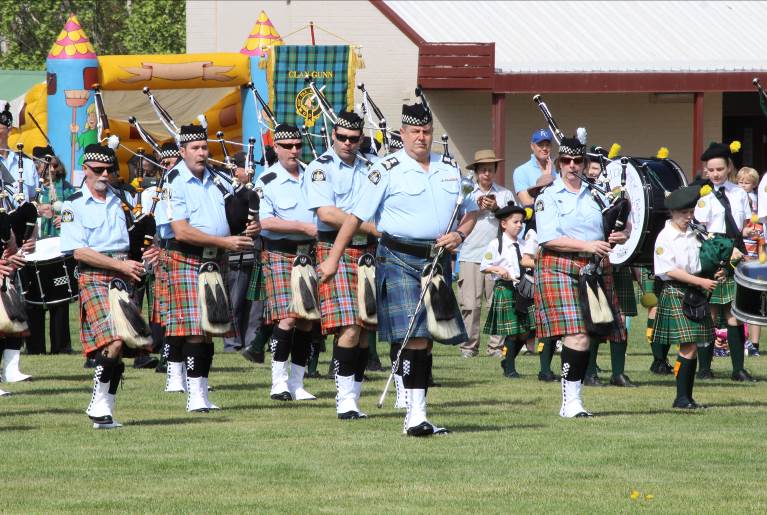 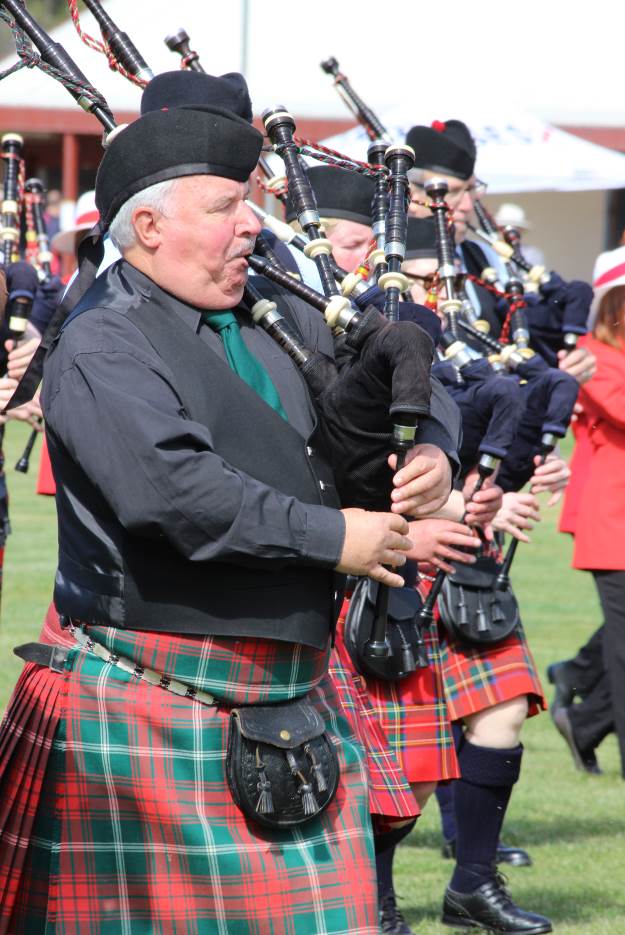 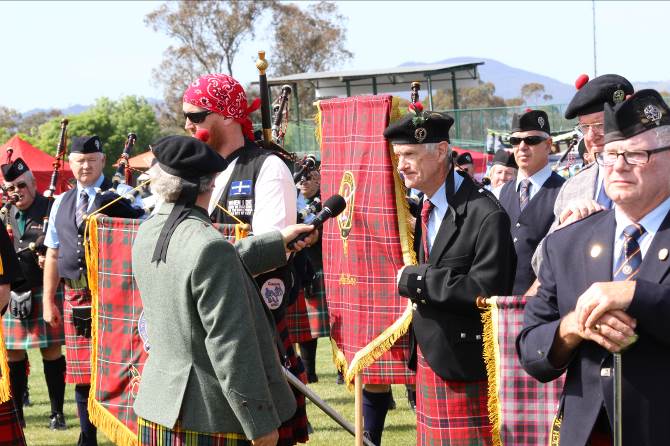 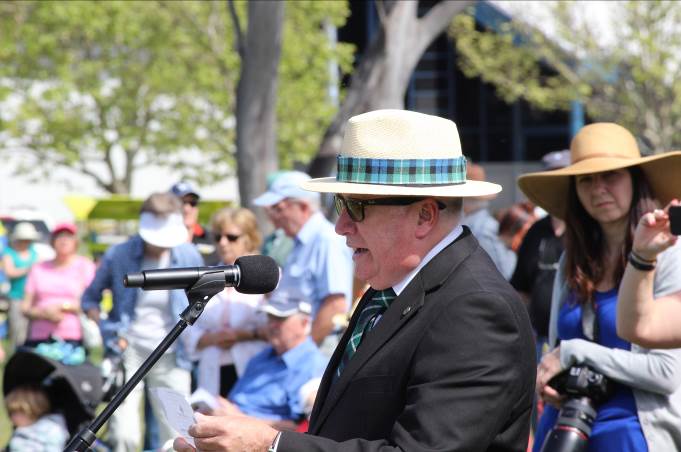 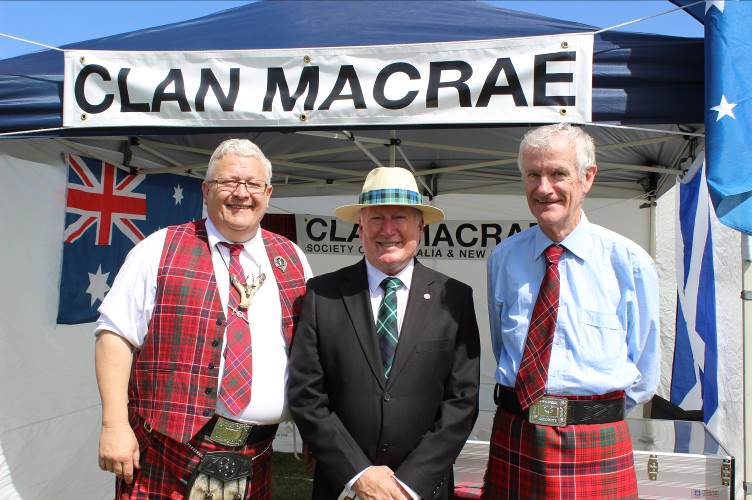